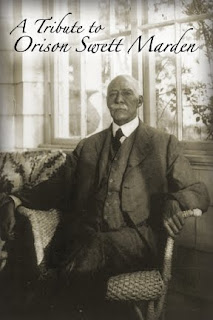 I came across an article entitled “The Power of Personal Development”. It’s written by Jeffrey Gitomer and was published in the SUCCESS Magazine. He mentioned about Orison Swett Marden, one of the founders of SUCCESS magazine.
According to Gitomer, Marden have authored more than 40 books and was a leading positive-attitude genius of the 20th century. He was well-known before 1930. He was a founding father of personal development and positive thought. I must admit that I never heard about Marden until I read the above article. I am particularly interested in the words of wisdom that was mentioned. The thoughts are really brilliant, direct, and honest. It’s one of those meaty parts of a written work that I can’t wait to swallow it up and meditate its taste to my heart’s content.
Here are a few of Marden’s words of wisdom from the book he wrote in 1908, “He Who Thinks He Can”:

“Every child should be taught to expect success.”

“The man who has learned the art of seeing things looks with his brain.”

“The best educated people are those who are always learning, always absorbing knowledge from every possible source and at every opportunity.”

“People do not realize the immense value of utilizing spare minutes.”

“No substitute has ever yet been discovered for honesty.”

“Poverty is of no value except as a vantage ground for a starting point.”

Who is Orison Swett Marden?

The son of poor parents, he was born in 1850 in Thornton Gore, a New Hampshire hamlet, to Lewis and Martha Marden. His father was a farmer, hunter, and trapper. His mother stayed home and took care of Orison and his two sisters. Orison was a mere 3 years old when his mother died at the age of twenty-two. Though his father was devastated by the loss he did his best to raise his three children and provide for them their basic needs. An unfortunate accident occured in which his father was seriously injured by a fallen tree trunk while setting a bear trap. Soon after the accident Lewis passed away and was buried along side his wife Martha… Read more