Trinity Broadcasting Network’s Matt Crouch interviews Manny Pacquiao prior to Manny’s big fight with Floyd Mayweather. Manny shares his faith and the emptiness he felt in his life before he found Jesus Christ.

As a former Roman Catholic, he said: “I went to church on Sunday, but from Monday to Saturday, I was in the bar drinking.I was gambling … I committed adultery. I didn’t care.” However, Manny ultimately became a born-again Christian. He said in other interviews: “We’re not talking about religion here, but a relationship with God. Christ said unless we are born again we cannot enter the kingdom of God. Jesus Christ said: ‘I am the way and the truth and the life. No one comes to the Father except through me.’ There is no other way. The only way is through Jesus.”

“Being a Christian means accepting Christ as your savior, your God. That’s why you are called a ‘Christian. ‘ If you remove Christ, there’s only ‘ian’ and that means ‘I am nothing.” – Manny Pacquiao

“I’m happy because I found the right way, salvation, born again. We are required to be born again, all of us. Christ said unless we are born again we cannot enter the kingdom of God. So it’s very important to me. Jesus Christ said: ‘I am the way and the truth and the life. No one comes to the Father except through me.’ There is no other way. The only way is through Jesus.” Manny Pacquaio is a Filipino world champion professional boxer. At 32 he was elected to the Philippine House of Representatives. He is the first and only eight-division world champion, in which he has won ten world titles, as well as the first to win the lineal championship in four different weight classes. According to Forbes, he was the 14th highest paid athlete in the world as of 2013. “All the blessings that I enjoyed, I shared it with the poor. I trained my family to be generous to the poor. Deep in my heart, since the beginning of my fortune, I have the heart to share my blessings with the poor. I have lived miserably where I experienced sleeping in the street and had only water to drink because there is no food to eat. And that is what inspires me to give and share.” – Manny Pacquiao (Read Story)

“I remember as a little boy I ate one meal a day and sometimes slept in the street. I will never forget that and it inspires me to fight hard, stay strong and remember all the people of my country trying to achieve better for themselves.” – Manny Pacquiao “With God, hard work and focus I can accomplish what is ahead of me.” – Manny Pacquiao

“Faith is my motivation to win.” – Manny Pacquiao 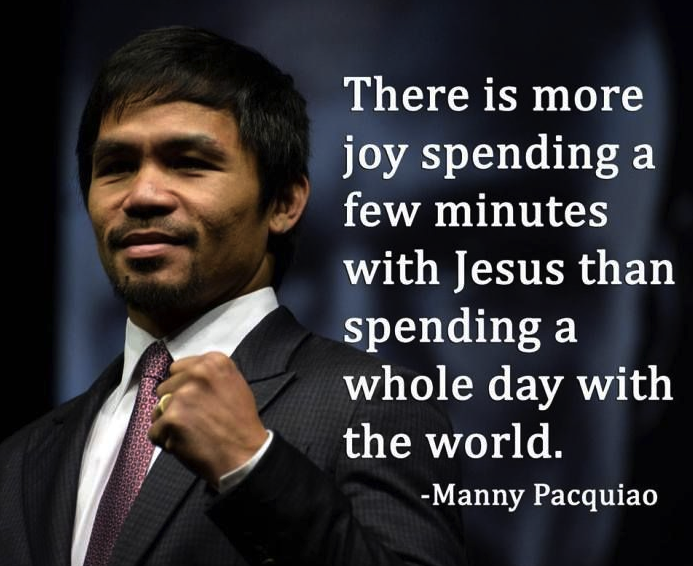 “There is more joy spending a few minutes with Jesus than there is spending a whole day with the world.” – Manny Pacquiao