Dr Daniel Shayesteh is an Iranian immigrant who arrived in Australia with his family in November 1991. Daniel is married to Mary and they have three daughters. Dr. Daniel was deeply involved in the Iranian Fundamentalist Revolution (1979) as a leading Muslim political leader and teacher of Islam and religious philosophy. He speaks three middle-eastern languages (Farsi, Turkish and Azerbaijani) and is an accomplished poet and classical middle-eastern musician. He was saved wonderfully through Christ, when he escaped to Turkey after falling out of favour with Khomeini’s political group. On his arrival in Australia Daniel sought fellowship with Christians from Islamic backgrounds. Read more about Dr. Daniel Shayesteh here

“There is no God but Allah and Allah is ONE”. Quran starts with a negative statement. The word “one” is Satan’s finest trick on Islam. Satan is a deceiver, but not a fool. Satan knows that within the “oneness” of anything, be it god or anything, there is “plurality and diversity”. Here Allah himself says and count himself says he is “One”.That means we can count Allah like one pen or one car. Why there is only one Allah and not 2 Allah’s? Quran gives the reason for that. Quran 21:22 and 23:91 says that if there is 2 Allah’s in this Universe, they both will fight each other for their belongings and at the end they both will destroy them self.See here the all powerful one Allah himself gives a very silly reason for his existence.Why Allah says throughout Quran that I am only One.Because these words are simply coming from a human’s brain and mouth.It is very clear that Mohammed knows about many tribes and its leaders of his time.Tribal leaders never allow 2 leader in one tribe at a time and also the tribes always fight each other for tribal supremacy.This assumption of tribal leadership fighting is simply introduced here in the Quran by Mohammed as the reason for why there is no 2 Allah’s. A supreme God never wants to tell like silly and lay man reasons of his existence.As per Holy Bible, God is an infinite spirit, and we cannot see him ever and this spirit is all knowing and all powerful.He is not restricted to being in one location at a time. He fills every inch of space throughout the universe with all His wonderful personal attributes.Bible says God’s spirit wants to stay inside each of us because our body is God’s temple.Thats why Christianity talking about the personnel God and its relationship. Although God is distinct from His creation, all His creation exists within Him. We cannot count almighty God.Therefore God of Bible and Allah of Quran is not same. Thank you for watching & God Bless you. – Dr Daniel Shayesteh 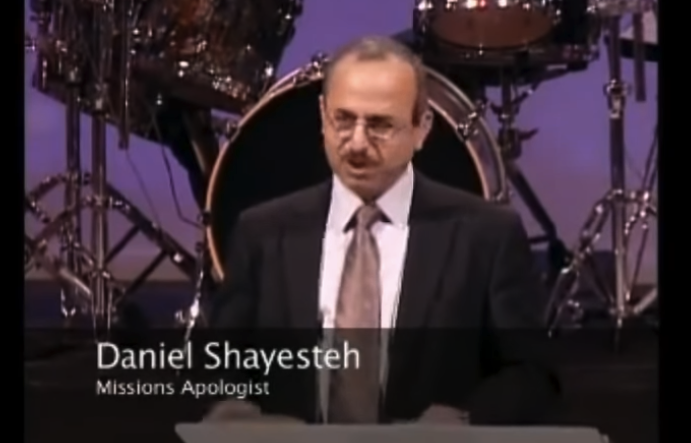