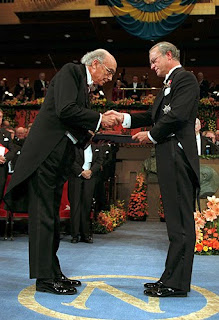 This is appalling. Calling God’s word, the Bible, a “handbook of bad morals”? How  could Saramango say that? Did he read the “right” Bible? What’s his motive?
Of course, he is entitled to his opinion. All I can say is this: “Be not deceived; God is not mocked: for whatsoever a man soweth, that shall he also reap.” (Galatians 6:7)
—o00o—
LISBON (AFP) – A row broke out in Portugal on Monday after a Nobel Prize-winning author denounced the Bible as a “handbook of bad morals”.
Speaking at the launch of his new book “Cain”, Jose Saramago, who won the 1998 Nobel Prize for Literature, said society would probably be better off without the Bible.

The book is an ironic retelling of the Biblical story of Cain, Adam and Eve’s son who killed his younger brother Abel.” Read full story here